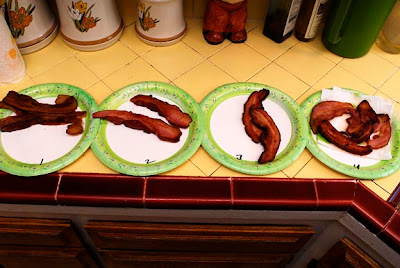 It was a beautiful day. The thermometer was rising and I needed an excuse to fire up 4 cast iron pans in the kitchen. It was Bacon Friday. Today is the day that 3 expert bacon tasters are going to sample 4 different and unique bacons. These bacons represent different parts of the country. We have Scotts bacon from Kentucky, Nueske from Wisconsin, Butlers from Nevada, and Chilebrownacon from the homestead. Chilbrownacon makes this tasting special. It pits my creation against some heavy hitters. Let's meet the tasters. 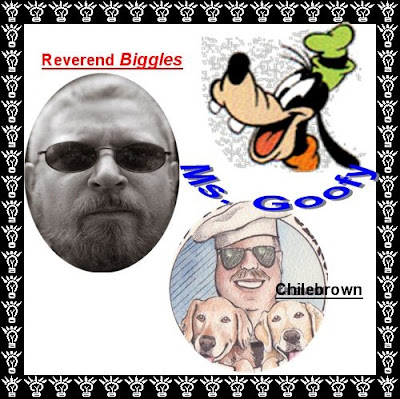 There is the Reverend Biggles in the House. His expertise on everything about meat can be viewed at his tome Meathenge. The Reverend is a multi talented, gifted, and extremely rugged individual. He can come to your house and build a barbeque in the middle of your lawn with just his bare hands. He can smoke anything. His opinion is respected and trusted, besides, he owns a nice camera.

Ms. Goofy's claim to fame is she has never met a Chicken Fried Steak that she has not liked. She is a beautiful women that just happens to be my wife. She is an expert at Meat Adventures and Bacon tastings. She is an expert at Italian cooking. I trust she will be fair and honest about the Chilebrownacon.

Chilebrown is a self appointed ambassador of promotion to find the best bacon possible. I have been on a quest to find this Holy Grail of Bacon. We found it briefly at the A&B market in Bend Oregon. Sadly this butcher has retired. I have been searching all over the country for a new Gold Standard of bacon. I am looking forward to this tasting.

The results are in. The votes have been tallied. Chilebrownacon is victorious! It was a close race and Nueske and Chilebrownacon were tied for first. The tie was broken by a swing vote by Ms. Goofy. She loved the Meaty taste of the Chilebrownacon. Did I tell you about Ms. Goofy's new car. It is unfortunate that Chilebrownacon is in limited quantities. Nueske will be around for a while. This means that Nueske will be be the new Gold Standard of Bacon. The quest will continue and there will be future Bacon Fridays. Amen. 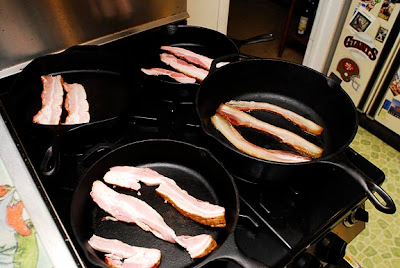 Photo by Biggles
Posted by Chilebrown at 6:52 AM

Most excellent post, dude. Nicely done and thank you for the kind, truthful words. I think I'll grill some bacon tonight!

Four cast-iron skillets? I mean, I have four or five myself, but they're all different shapes!!

Congratulations, ChileBrown. Where did you get the pork belly that you baconated?

I procured them from our local International Market in San Pablo. It is the ultimate market for fresh pork and seafood.(cheap).I received a false alarm that they had closed down from that contractor that creates lawn barbeques. Thank the bacon fairy's he was wrong

I'm impressed by the credentials of the tasters and by their obvious impartiality. This kind of serious research is vital to the Gold Standard Search.