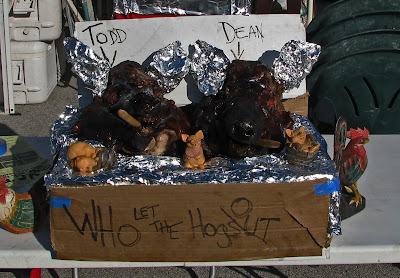 We have arrived at our Mecca, ‘The American Royal’ barbeque competition. Our mouths dropped and our eyes widened with amazement of the hugeness of this event. Five hundred and more competition teams all gathered to do battle. A haze of smoke hovered over the venue, on this opening day. The teams were setting up for the competitions and the Friday night parties. Oh man, was it a party! There was an actual competition for the best party. Bands galore, barbeque, adult beverages and theme party decorations was the scene. We were unable to attend every party but did our best. 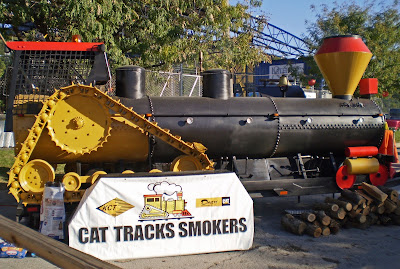 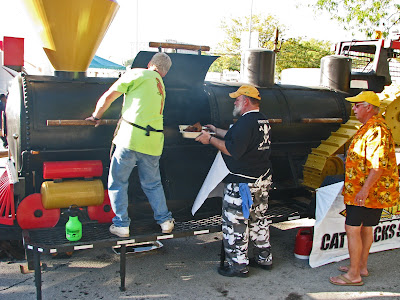 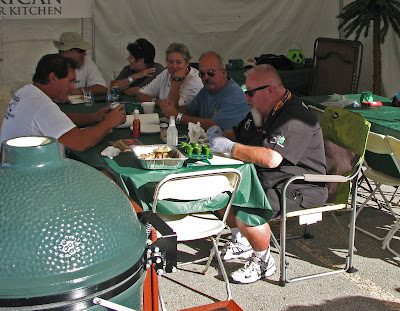 Several barbeque celebrities were spotted in the crowd. Ms. Goofy, ‘Chris Lilly’ of ‘Big Bob Gibsons’ and Dr. BBQ were in the house. There was a special camaraderie among this crowd. We would walk from booth to booth learning, teaching, and bull****ing about the almighty barbeque. This brotherhood of smoke enthusiasts was here to celebrate and compete in the cooking of meat. 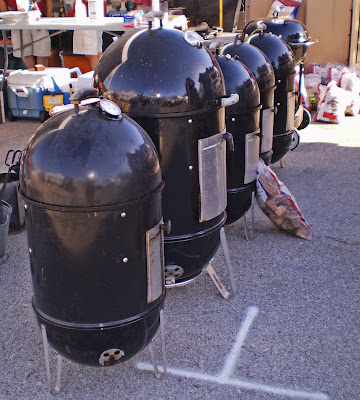 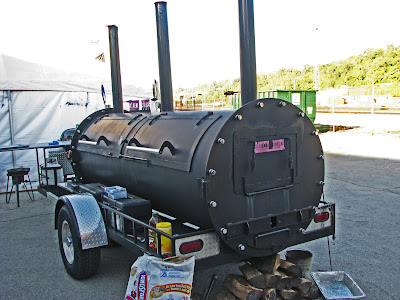 It is a lot of fun to see the different barbeque setups. This show brought out some very fancy cooking rigs, from the ‘Weber Smoky Mountain’ to a huge custom pig. This was the place to brag and show off your cooker and then back it up in competition. Ms. Goofy got all kinds of inspiration for her Christmas shopping list. (Hint) 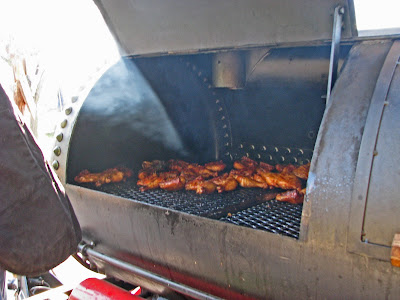 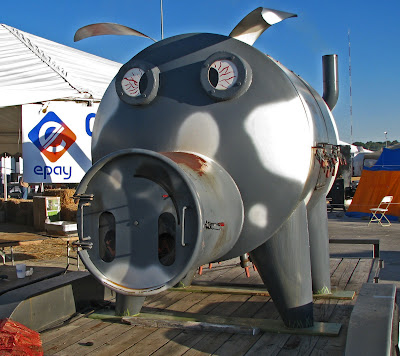 This was only the first day of competition. Today was basically setting up and a huge party later at night. Tomorrow is the invitational competition. To participate in this competition you have to of won a state competition. These will be the ‘Big Boys’ fighting for title. Sunday will be an open competition where everybody is invited to compete. Did I mention we are having a blast? 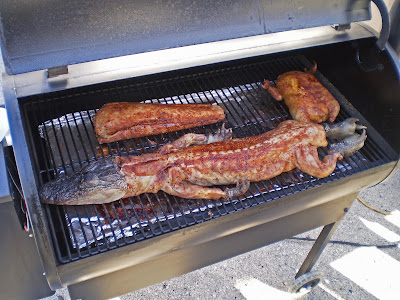 Posted by Chilebrown at 8:07 AM

Looks like serious business mixed with party time. Good golly that is a lot of bullet smokers in a row!

Is that afreakin' ALLIGATOR on that last rig? Did you get to sample any?

Loved the pics. Who is the guy next to Ray L? He looks familiar but can't place it.

The pig smoker was our favorite.

Alligator? What do they think this is, BBQ Pitmasters II? ha ha

Greg, That sums it up pretty well. The bullet is what I use.

Robert, Yes we did. It did not taste like chicken. They used a really good sauce. It was flaky tendor but had a little fish flavor.

Zoomie, You only live once. We had to try it.

Chris, I am not sure. When we snapped the shot Ray said "I have looked better. The giant pig was so kool. When it was dark you could see the fire in its snout.