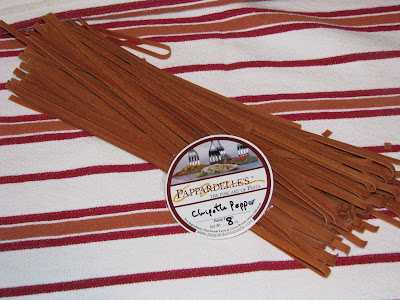 Chipotle pasta caught our eye at the ‘Kansas City River District’ farmers market. This noodle booth sold all different flavors of pasta; from chocolate to garlic the selection was huge. The name of this pasta company is Papparadelles’s. Now Pappardelles’s is not based in Missouri but Colorado. We did not let that sway our decision to try some Chipotle pasta. Remarkably this pasta survived a journey in our suitcases on the flight home. This pasta sounded like a good accompaniment to some pulled pork and Cole slaw. Let’s put a pot of water on the stove and get it boiling.
There are no secrets to cooking pasta. Salt some boiling water and cook the noodles until a little shy of done. The pasta will have a minute or so of carry over cooking when added to the sauce. A cream sauce will cover these spicy noodles. Small cubed bacon was simmered in some olive oil for several minutes. A tablespoon of flour was added and simmered for a minute more. Heavy cream was added and cooked until thick and bubbly. The sauce was seasoned with a tablespoon of pureed ‘chipotle en adobo’ and salt & pepper. The cooked pasta was added with a ½ cup of parmesan cheese. Stir and serve this rich and creamy delight. 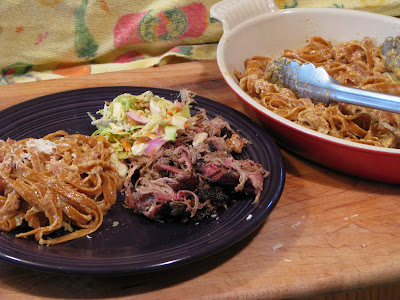 The chipotle noodles had a smoky jalapeno pepper flavor. The noodles were not hot enough to make one cringe but the flavor grabbed your attention. The cream sauce with the adobo and bacon made these noodles rich and decadent. What a great side dish for our pulled pork.
Posted by Chilebrown at 8:00 AM

100% foodtastic, dude. I was turned off by their chocolate pasta, just too weird for my taste but the chipotle sounds great. Then you have to make that absolutely perfectly sauce to go with them. I'd just want a plate of that "side dish" forget everything else.

Chris, The pasta was very good but the pulled pork was even better. The whole meal was so good. We have some chocolate pasta to try. I am not sure what we are going to do with that.

The cream was a great idea. That plate of food looks so good.

All of it looks delish! I admit, even though your post was about the pasta, my mind detoured over the pulled pork. Mmmmmm!