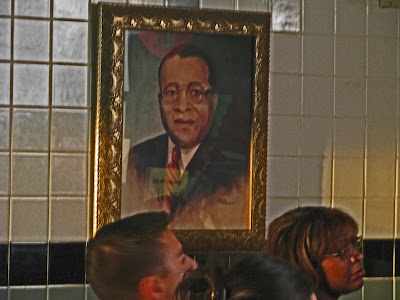 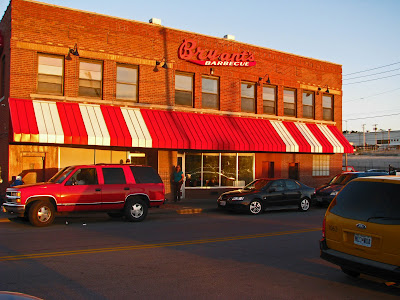 We needed to warm up our bbq taste buds. What better way to start but the famous ‘Arthur Bryants’? We have seen this establishment on numerous TV shows and it has been recommend by several readers of Mad Meat Genius. We found this bbq palace fairly easy. There is not much else around but this large brick building. The parking lot was full of cars. 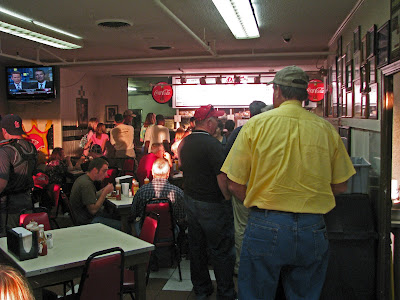 Once inside, a long line of barbeque enthusiast snaked throughout the restaurant to place their order. Nascar was in town and a film crew was taping an episode for a celebrity cook from ‘Speed Network’. To be honest we do not watch Speed Network and we had no clue who he was. He did have a colorful race jacket. 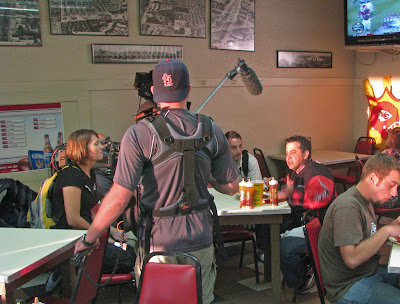 The line moved quickly. We placed our order of a three-way combo of ribs, rib ends, pulled pork and a side of pickles. This was served on a large platter and came with Wonder bread. Once at our table three Arthur Byrant sauces were available. The Original, Sweet Hot and a third that I do not recall. These sauces were tomato based and sweet in the ‘Kansas City’ style. The meats we ordered except for the ribs were sauced. We did try the sauces on the ribs and thought they were pleasant. The meats were tender and tasty. The ribs did fall off the bone. Were these meats at competition level? No, but when you place them in the entire package of our visit, they were very good. The ambiance, location, reputation, and good food all added up to a great food experience. 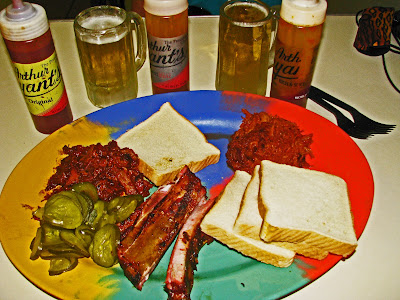 Today is judgement day for the ‘American Royal BBQ Open’ competition. Four hundred and fifty judges were present to judge over 500 entrants. We were to judge five meat categories today. Usually we judge chicken, ribs, pork and brisket, but today a fifth category of sausage was on the plate. We were situated in a large exhibition hall with long tables to sit and judge. Our table consisted of judges from all over the country. California, Missouri, Georgia and North Carolina was represented at my table. It was unique and fun to converse in all of our different dialects and accents of these United States. We tasted some of the best barbeque of the nation. The scores were tallied and a winner was declared. 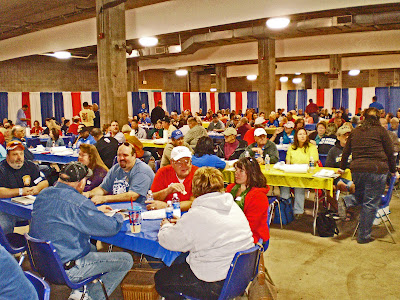 These last three days at the ‘Royal’ have been so much fun. We have met new friends. We enjoyed meeting and hanging out with the team from Canada. They were featured in the local Sunday newspaper. I met Chris Lily who is a gentleman and celebrity barbeque champion. This event has been a learning experience galore. We may smell like barbeque smoke but if you could see the grin on our faces. We still have several more days to eat and drink our way through Missouri. We may even go to Kansas, but do not tell the locals. I will explain why later. 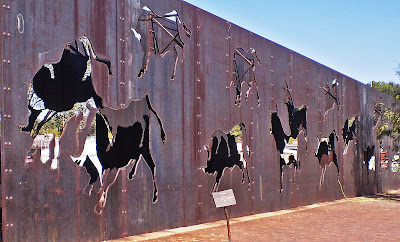 P.S. Thankyou for all your comments. I have limited Internet access untill Monday.
Posted by Chilebrown at 7:57 AM

You must literally be in hog heaven. Enjoy!

So glad KC and the Royal was good to you... will you be doing the judging thing again? i have lots of friends that say never again.

Hey I finally got a good internet connection. I was buying a lot of coffee putting out the last couple of posts.

Zoomie, We will be in Hog Heaven for a couple of more days. Yay!

A Year on the Grill, Stop by Lidia's Wednesday night and I will buy you a cocktail. We had a blast.

Sausaages sound yummy. I hope you are bringing me back a really big doggy bag!

Oscar get off the couch!

Cool! We had ribs and burnt ends there. Bought a big bottle of "original" sauce. (Not sweet, I swear.)
So glad you are having a great time.
Come home.