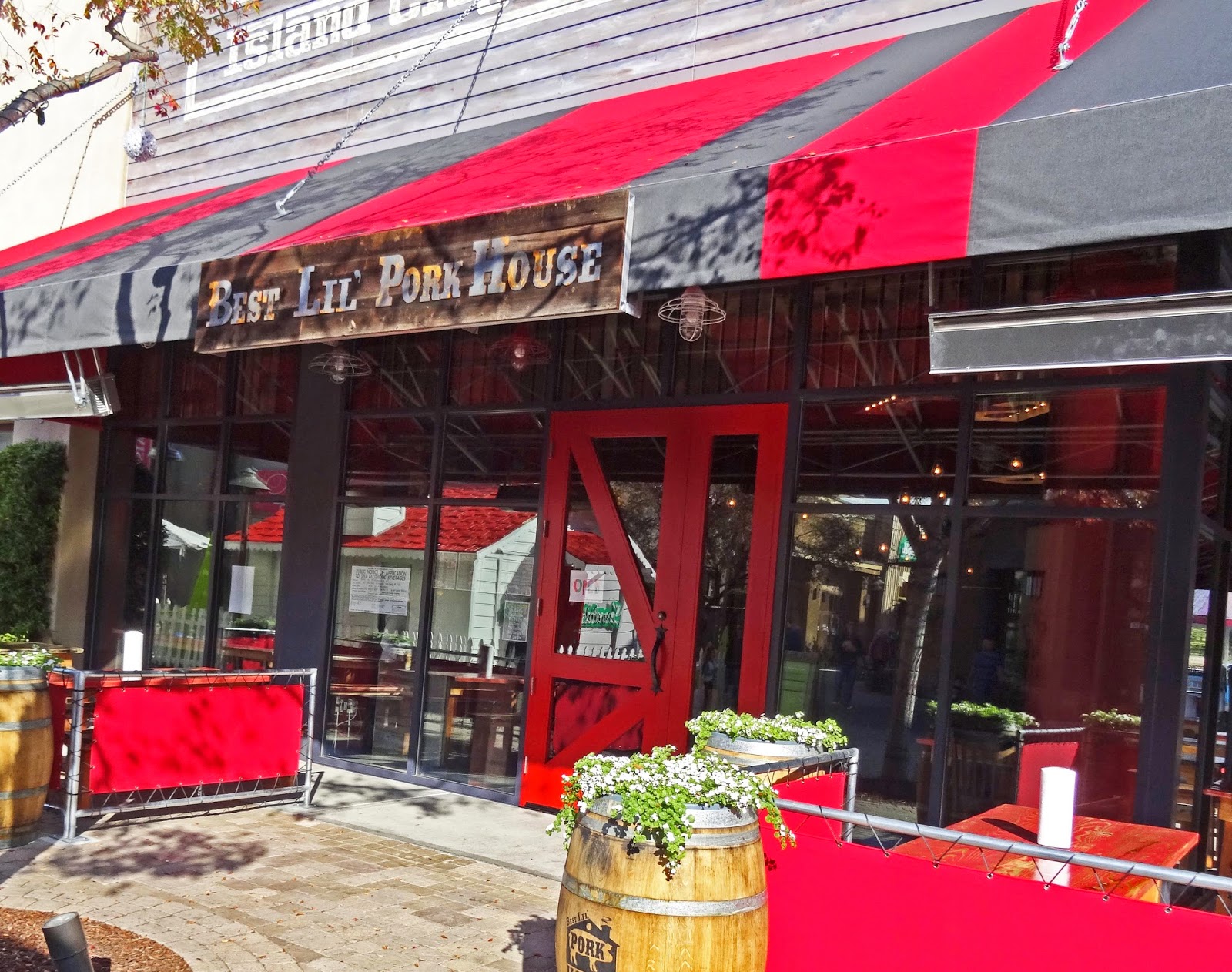 A cardinal dining sin is to go to a restaurant in the first opening weeks. This Mad Meat Genius flew solo and braved the Black Friday crowds to experience the ‘Best Lil' Porkhouse in Alameda, California. We will do this critique a little backward by starting with the conclusion. I will return. Best lil Porkhouse is a clean, modern, fun bbq restaurant. There was great service (except for minor hiccup) by the hostess’s and server. The bar has a great selection of micro-beers. There is a nice outdoor patio for summer dinning. The brisket was excellent. It was tender, had a great looking smoke ring with perfect smoke flavor and was served in generous proportions. The sides were fresh and tasty. How can you go wrong with beans studded with real bacon pieces? The baby backs were tender and flavorful. This new restaurant has a lot going for it. It should be popular with the population of Alameda. “And now for the rest of the story” 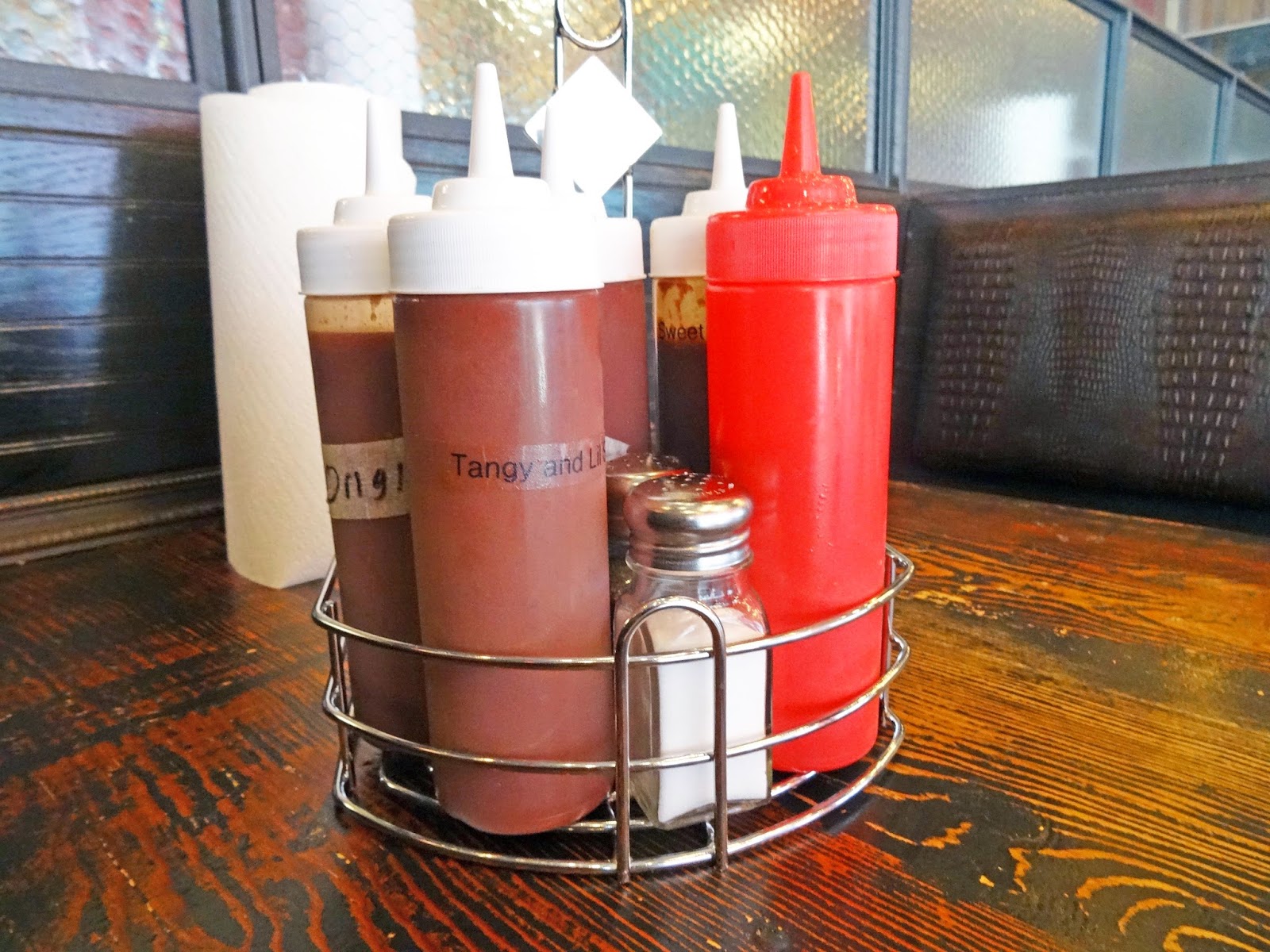 Each and every table comes equipped with a basket of non-descript squeeze bottled house made bbq sauces. These sauces were tomato based with different flavor attributes. The original flavored was similar to K.C. Masterpiece. This is not a bad thing and is a very familiar flavor. There was a sweet and hot version. The server offered me an ultra hot version called ‘Lucifer’. This was a habanero laced sauce that punished and burned so good. I loved it but would only recommend this sauce to hardcore Chileheads. I made the mistake of not asking for non-sauced meats. Both ribs and brisket came sauced from the kitchen. My bad.
My choice of sides were beans, Cole slaw and a corn bread muffin. I loved the slightly sweet molasses based beans that had real chunks of bacon throughout. The Cole slaw was pedestrian but a welcome addition. The corn bread was fresh and hot out of the oven. It was surprisingly not offered with butter or honey. It had kernels of fresh corn in this tasty mix of cornbread. 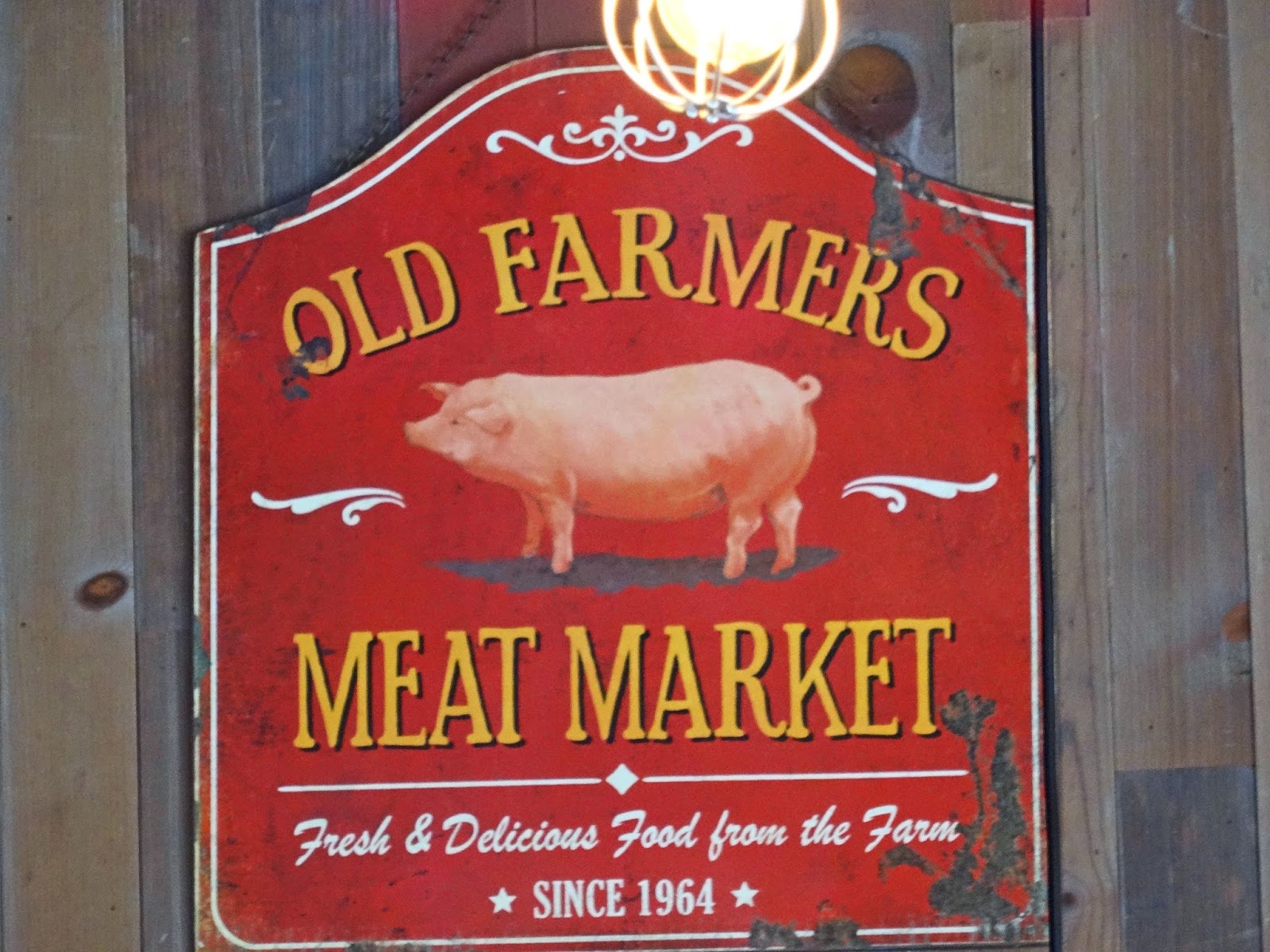 I made a mistake of not asking for sauce on the side. The ribs had been slathered with sauce and heated on a grill. This added a char (burnt) flavor that was a little off putting. Once you got past the messy charred sauced exterior the ribs were seasoned perfectly. The baby backs were cooked to perfection. The St. Lois spareribs were a different story. These were not even true St. Lois style cut ribs. The rib tips were still attached. I do mean attached because even the ribs were not separated. A sharp heavy cleaver was needed to separate these bones. (Rib bones that are not separated will disqualify you from winning in KCBS bbq competition). With the added fact that these ribs needed more time in the smoker made these ribs a chewy mess. They were seasoned well but I had a tough time just separating and knawing the ribs. They did have good flavor but not worth the effort. 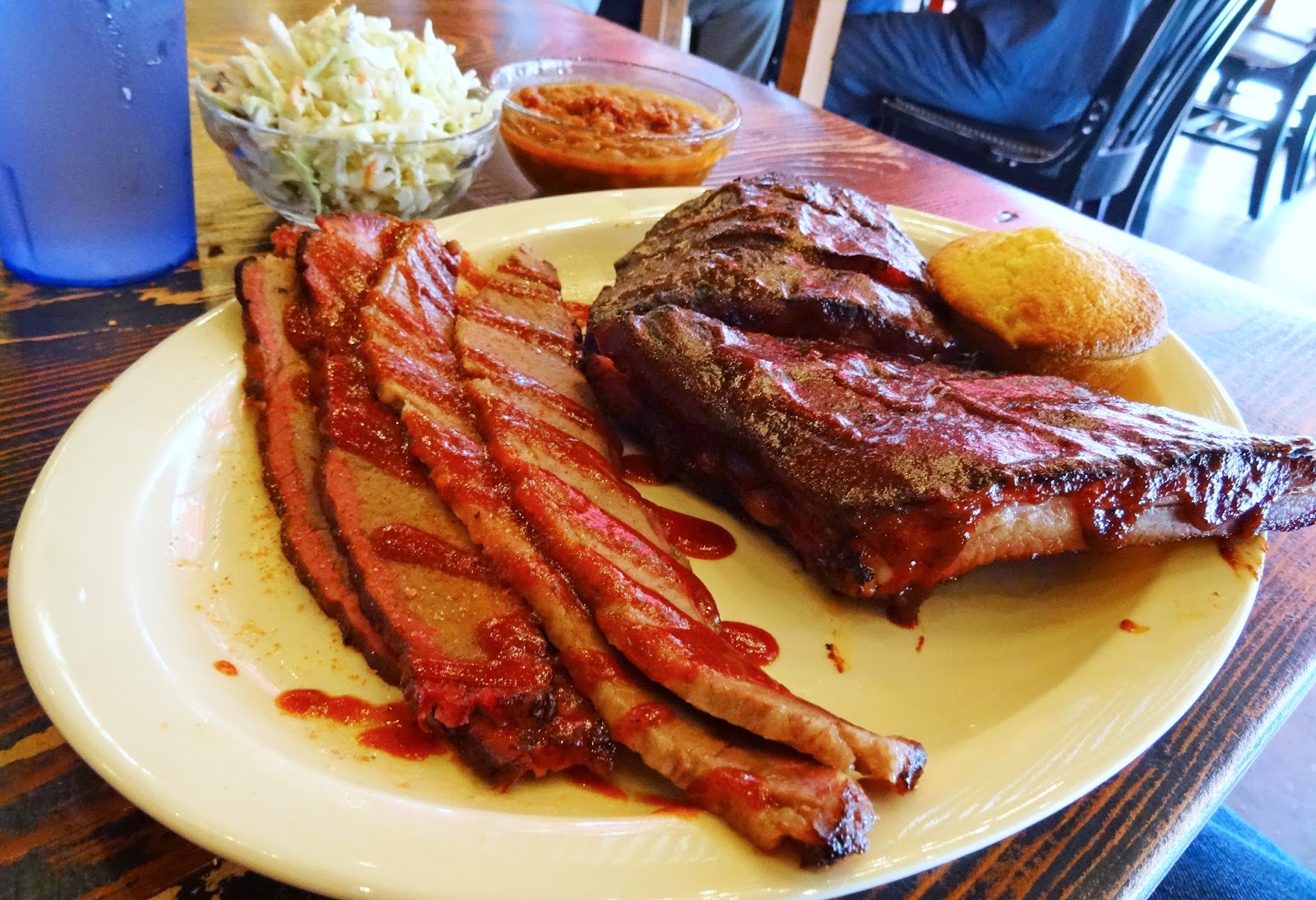 The following description was the minor hiccup in my experience at this new restaurant. My original server was very pleasant and cheerful. There was a slight problem that English was not his native language. We had a communication problem from the get go. He also did not have menu knowledge. I always order ribs and brisket the first time I go to a new bbq joint. The server wrongly asked me if I wanted the beef or pork St. Lois style ribs. I asked him is he was sure about those choices. I like beef so I said bring them both. He left and I noticed a beehive of activity at the server’s station with my server involved. Minutes later a new server introduced herself and said she would be taking over. She was the perfect waitress and I am not sure what happened to my original server. The plate arrived with St. Lois pork ribs and baby back ribs. My new server apologized and said they did not have beef ribs. She offered to return the plate to the kitchen but I had a death grip on this plate because I was starved.
And now you know the rest of the story. There were a couple of mishaps but overall Best Lil' Porkhouse should be a success story. I know Ms. Goofy will want to come try the pulled pork and mac and cheese. Bye for now.

Posted by Chilebrown at 2:38 AM

The food looks good for sure. I wish we had something like that around here.

Three Dogs BBQ, We have three in the Bay Area. We have been to the one in Marin. In Marin they have to use electric smokers to not pollute Marinites crystal geyser air.

710Mr. Brown does this place have a address or is it a secret? I believe it's a secret because first thing did was go to the company website and no address. I would call this a supper soft opening. Mr. Brown your thoughts would be appreciated. GWH

GWH, It is Southshore Center in Alameda. It is not real well marked so you may have to walk around and do some shopping. Also it has only been open a week.

sounds good to me. Is this the same outfit that is in Marin?

Greg, Yes it is. We have been to the one in San Rafael and liked it. This one is a lot bigger and fancier.

There is also one in Corte Madera in the old Max's building just off the freeway. Now that they are open in Alameda, I'll just go there to get my bbq on.

You are indeed a brave man to go to a newly opened restaurant and go out in public on Black Friday. Too often businesses forget that they only have one chance to make a first impression.

Zoomie, We have not tried the Corte Madera one. We may have to investigate.

Big Dude, This location is located in a mall. I think I got the very last parking space. Parking karma is returning. I do not consider myself brave just hungry.

Went to try it out a couple of days ago. Not bad. I'm happy that Alameda now has BBQ once more since I am frequently in the area.

Too bad about the St. Louis ribs being saced and burned and not trimmed or cut properly I think we will have to go in and see if this repeats and offer some gentle advice. Can't have this happen in my hometown!