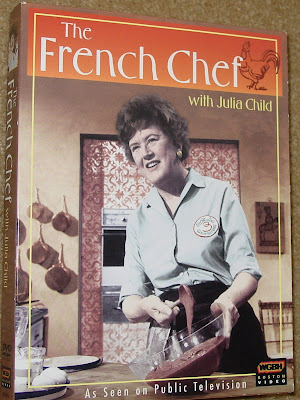 My favorite show used to be Captain Kangaroo. He was always being fooled by Mr. Moose with his knock, knock jokes. He would then receive a shower of ping pong balls. When the Captain was not on we were exposed to the original Celebrity Chefs. There was no food network. Emeril was probably a line cook. I do remember Graham Kerr, The Galloping Gourmet. His show would come on in the morning. He would always tell a joke to start the show. He was very entertaining. He caught the attention of my young impressionable mind. He made calf brains look appetizing. I even lobbied my Mother to buy some. That did not go over to well. We would also watch 'The Grande Dame' of PBS Julia Child. What a show this was! She was over the top. With her sing song voice and large presence, a fun cooking environment, was created. This was the beginning of cooking on TV as entertainment. Martin Yan and Jeff Smith followed in the PBS lineup. I was hooked on cooking shows at an early age. I now have a DVD of Julia to remember how entertaining she really was.
"The French Chef is a three DVD set. It can be purchased from all the usual suspects. What a treat this is. It is a compilation of her PBS shows. The three discs are separated by categories. Disc 1, is about Starters and Side Dishes. One of the episodes on this disc is Bouillabaisse a la Marseillaise. She hacks up this monster fish with a Huge cleaver. It is pretty impressive seeing her hack up this whale. Disc 2, is about Main Courses. Tripes a la Mode is entertaining because she brings out the whole stomach. She has to wrestle it to the counter. Disc 3, is about baking and desserts. Julia makes a Queen of Sheba Cake in an episode. The shows span from the early black and white episodes in the 60's to the later color episodes. It was a kick to watch Julia drop something on the counter and just swipe it to the floor.
I have had a great time watching these show. It really makes you appreciate what a great teacher and entertainer Julia was. It also makes you realize how lame a lot of the new cooking show have become. This DVD will bring a smile to your face.
Bon Appetit! 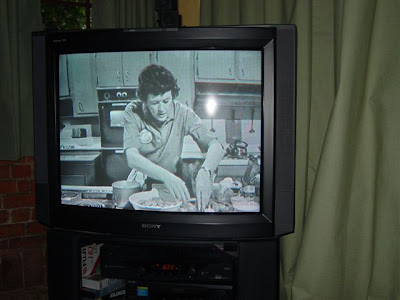 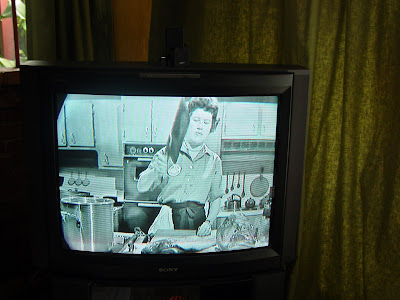 Posted by Chilebrown at 7:40 AM

I liked the Captain, Mr Green Jeans, Mr Moose, and Dancing Bear but I think most of all I liked Bunny Rabbit (and your Mother agrees).

Your post reminded me of all those cooking show hosts I have watched over the years and almost forgotten - like the Galloping Gourmet! What a trip! I've already told My Beloved that I want Julia for Christmas - she is my uber-heroine! Such panache! Such guts (literal and figurative)!

Ah, EXCUSE me!, President of Cookies, it was Mr. Bunny Rabbit. He only tricked the Captain out of carrots. That picture does not look like him at all.

Zoomie, Christmas in June would be special!