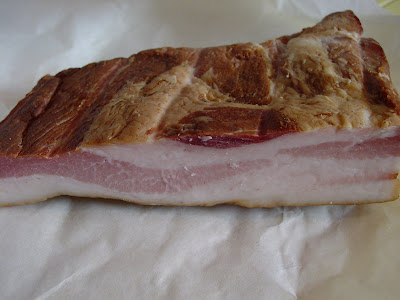 Some of you might know that I love bacon. We have traveled great distances to find the 'Gold Standard of Bacon'. There was a butcher in Bend Oregon called "A & B Meats". This was the 'Gold Standard'. Alas, they have retired. Ms. Goofy and I are on a quest to find the killer bacon. I am going to start a feature called the "Bacon Review". If you have any suggestions for finding some good bacon, let me know.

This is a new store that has opened up in Napa. We took a Meat Adventure to visit it last Saturday. It has a lot of cured meats. They were giving samples of a Pork Roast that they had just cooked. You would not believe how wonderful the store smelled.
The bacon looks beautiful. The rind is off. {Some people like the rind on. I do not understand why people like the rind on. They call it bacon gum. I call it insanity. Why would you put gum on a Prime Rib? }. The bacon had a mellow smoke smell. It was not very pronounced. It was not real meaty. I sliced it and cooked it in cast iron pan. It had a nice pork flavor. It seemed to have the right amount of saltiness. I wish it could of had a little more smoke. Overall, I would rate this bacon a 3 out of 5. It was very good, but it did not have that something, to make it stand out.

Yeah, the smoky point is a tough one. I too enjoy the smokiness, but many do not. I've talked to more than a few people who wouldn't buy FC's bacon because it was too smoky. It's mellowed a bit over the years, but luckily it does vary. So, once in a while I get a load that's more to our liking. Howabout Neuski's?

CB,
For smokey, Benton's beats all.

Yeah, I don't like the bacon gum either. Too hard to chew. OK, I'm a sissy-ass girl.

Then you cook it just a tad longer and it turns in to bacon cracklins! Oh man, like bacon pop rocks.

You can buy Neuske's in Alameda at Baron's Meat and Poultry.
http://www.baronsmeats.com/

It is very, very good. I will be doing a review in the future.