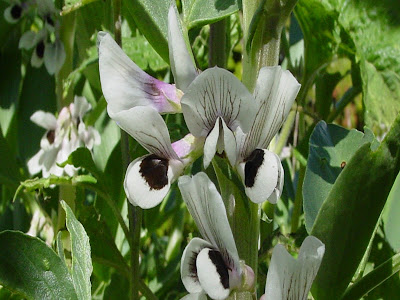 The fava bean plants in my garden are flowering. This is a sign that spring is right around the corner. Spring vegetables are my favorite. I love artichokes, fava's, peas and asparagus. Fava's are easy to grow. My dad used to have a saying about Fava's.

My first experience with gardening was quiet by accident! I was a teenager living with my parents, upstairs; overlooking the backyard garden. It was the ‘Party 70’s’.’ Cheech and Chong’ were our”Role Models and Heroes”. Smoking was very” Kool and Hip” according to them. The ‘Smoke of the Day’, had a by product of “Stems and Seeds That You Don’t Need”. I had an idea of recycling then. It was to throw the waste out my window.Little did I know the consequences!

My father went to the “ ‘Navelet’ gardening center downtown”. Apparently there was a bunch of plants growing below my window that he could not identify. He had brought them some samples of the plants,. He returned: “’Paul’, I need to talk to you!” I did not have a clue what he wanted. My dad looked pretty serious! What did he want? My father replied, with a very disappointing tone,” I just got back from ‘Navelets’, they told me the sample from underneath your window was cannabis.” My mouth dropped, and before I could reply, my father said,” It must be that Mexican Fertilizer”

My Father was a Gardner by trade. ”World War II “came around and he served. He returned, married, and had two children. He had a career at the Post Office; He still made time to tend his garden. Flowers were his specialty. There was a lot of pride grown in his garden.. Being a juvenile, I was an unwilling participant in the mowing and cleanup of my father’s garden.
The experiences I had with my father made an impression. I am now experiencing joy in the garden. I did get to share my garden with my father in his later days. He would love the flowers and produce I would bring him. The majority of the plants I grew were from seed, and some were heirloom. He was now gardening through me. It was a time that we were together.
I went to Berkeley to buy a Haas Avocado tree. I knew my dad was in the hospital. When I returned, there was a phone call from the chaplain. I did not know how to deal with the sorrow, so I planted the tree. I named the tree “Dad”.
“Dad” I won’t be using any of that Mexican Fertilizer. Hey. Snerk! Your dad gave you a break, I think.

Damn dood, you had me laughing one moment and snifflin' the second. Blogs aren't supposed to be this good.

Yeah, then on third thought, I think you were dealing out the Mexican Fertilizer.