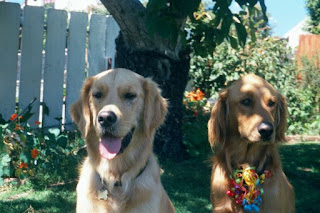 I was trimming some Rose Bushes on the side of the House. I could hear a whining in the background. I looked up and saw Mojo and Oscar. They were both prancing like they had to take a leek really bad. I ignored them at first. The whining became even louder. I thought maybe they had a mouse trapped. I had to go rescue the brave boys. Well, I saved them. It was a orange ball with a stripe that was caught between the barbeques. Poor Little Orphan Boy Mojo.!!!!
Posted by Chilebrown at 1:54 PM